MEMPHIS, TN, DECEMBER 4, 2019 – The Stax Music Academy announced at a press conference today in Memphis that it will celebrate its 20th anniversary in 2020 with a months-long celebration of special events, expanded and new programming, new fundraising efforts, and other activities. All of this is to celebrate the academy being the only music institute in the world teaching the timeless music of Stax Records and the Memphis Sound to thousands of young people for nearly two decades and helping them carry that music around the world to places like Italy, Australia, Germany, France, England, New York City, and Washington, D.C.

Among the announcements made were that the Stax Music Academy will be featured on NBC’s Ellen’s Greatest Night of Giveaways, a three night special during which Ellen DeGeneres and numerous celebrities will be surprising people with life-changing gifts. Celebrities will include Michelle Obama, Jennifer Aniston, Justin Timberlake, Robert Downey Jr., Melissa McCarthy, Michael B. Jordan, Jason Momoa, Christy Teigen, and many others. The special runs December 10, 11, and 12 at 7 pm CST. The Stax Music Academy episode will air on the final night as the finale to the special. 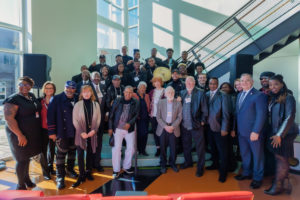 A program of the Memphis, Tennessee-based Soulsville Foundation – which also operates the Stax Museum of American Soul Music and The Soulsville Charter School, all at the original site of Stax Records – the Stax Music Academy began programming on June 1, 2000 in the cafeteria of a nearby elementary school while its permanent facility was under construction. The first class of the initial “SNAP! Summer Music Camp” featured workshops with the likes of Stax Records legends Rufus and Carla Thomas.

Since that time, SMA has accepted approximately 100 students per year into its August-May After School program and approximately 100 into its annual June Summer Music Experience. Its staff of professional musicians teach vocal and instrumental instruction, songwriting, music business, marketing, choreography, stage presence, and other aspects of the music industry. Closing in on its 20th anniversary, the Stax Music Academy will continue focusing on the legacy of Stax Records, but will also look ahead to the creation of its students’ own original music, reinterpreting Stax classics, and further making its own kind of music while teaching students new technique along the way with a strong dose of how to be socially conscious, successful, responsible adults and artists of the future.

One new component of SMA offerings will be a formal Songwriting and Music Business Cohort made possible in part by Mid-South native Justin Timberlake and the Levi’s Music Project, who together installed a new song lab in the academy in August 2019. SMA kicked off the new cohort during a two-day songwriting workshop Timberlake and some collaborators he chose, including songwriter/producer Timbaland. Students created five new, original songs and Timberlake and the collaborators worked with the students on the songs and later critiqued their final product in a private/public concert at the Stax Museum.

Later, in October, Levi’s and Timberlake launched a campaign to not only announce Timberlake’s new line of Levi’s but also to shine a light on the new Stax Music Academy partnership. As an ongoing commitment to Stax Music Academy, Justin established a $100,000 over-four-years scholarship fund so more Memphis youth can take their talent to the next level.

According to SMA Executive Director Pat Mitchell Worley, a well-known Memphis music veteran and cohost of the internationally renowned Beale Street Caravan radio broadcast, “The Stax Music Academy has always taught songwriting in some fashion at certain times of year, but only to an extent. Now, with the songwriting lab and the new cohort in place with full-time songwriting instructors, it will become much more of a formal offering and we plan to add considerable resources into this endeavor because we really are trying to create future artists and songwriters. It is very important that we prepare them this way and open a new set of doors for the academy to become a more serious player in the music business.”

Plans for the 2020 anniversary celebration also include a global practice challenge, a 16-hour, live-streamed Memphis music marathon, a new collaboration with the Trombone Shorty Foundation in New Orleans, an International Make Music Day SMA birthday celebration, an alumni gathering/donor event, and some surprises to be announced. Several new fundraising efforts will also be underway, including new sponsorship opportunities, new ways for students themselves to raise funding, and a new campaign from Steve Smith, chairman of the board of Concord, the organization that owns Stax Records. This campaign is designed not only to show Concord’s ongoing support of the Stax Music Academy in myriad ways, but also to highlight the Concord partners’ personal interest, by securing funding from their entire circle of influence.

“One of the things that most impressed my Concord colleagues and me on our visits to the Stax Music Academy,” Smith said, “was the dedication to preparing these young people for higher education and then continuing to embrace the alumni in so many ways. We feel that, in addition to the music education offered, this component of the academy’s youth development is invaluable. There’s no better way to ensure the continuation of the Stax legacy.”

The Stax Music Academy announced at the press conference that it plans to raise at least $1 million in the next 12 months, as was reported in the Memphis Business Journal.

“As we move into our 20th anniversary year in 2020,” Mitchell Worley adds, “we will definitely be reflecting on our accomplishments and our students’ successes from the past 20 years, but we also know we have a lot of work to do to make this the best music and youth development program in the country for current and future students. We’ll be constantly changing depending on our students needs and desires, and hopefully get them more involved in the planning process as we go.”