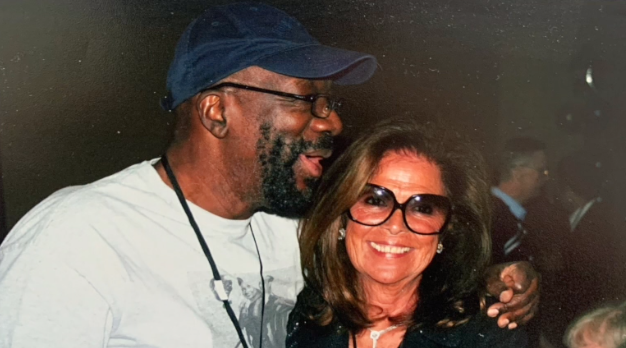 The Soulsville Foundation’s Stax Music Academy announced today that it’s launching its third annual #MusicMustContinue fundraising campaign with a special twist this year. We’ve received a $50,000 donation that will match all donations up to $25,000 for this year and 2023.

The donation is from the family of the recently passed Brenda Berger O’Brien (pictured above with Isaac Hayes), Pancho’s Mexican Restaurants retired owner/president, and a songwriter, producer, philanthropist, friend of the Memphis music community, and longtime Stax Music Academy supporter.

The donation from her family establishes the Brenda Berger O’Brien Memorial Scholarship Fund to assist with tuition costs for families who qualify for financial aid.

Mrs. O’Brien’s parents, Morris and Clemmye Berger, founded one of the most famous music venues in the South in 1943, the Plantation Inn Nite Club, just across the river in West Memphis, Arkansas. It became well known throughout the South as a gambling hall-turned supper club and one of the few nightspots in the region that allowed white patrons to listen to live music by Black artists. It was, according to the late, legendary music producer Jim Dickinson, where all Memphis music got its start, and where Mrs. O’Brien met an array of blues, soul, and rock and roll artists like Elvis Presley, Jerry Lee Lewis, B.B. King, Johnny Cash, Wayne Jackson of The Memphis Horns, Ben Branch, Willie Mitchell, Isaac Hayes, Floyd Newman, Gene “Bowlegs” Miller, Phineas Newborn, Sr., and his sons Calvin Newborn and Phineas Newborn, Jr.

A longtime resident of Boca Raton, Mrs. O’Brien first visited the Stax Music Academy in 2011 while working on a video for her song “Two Kings,” which she had co-written with country legend Pam Tillis. She made a donation to the Stax Music Academy so that students could perform as a gospel choir in the video. Coincidentally, Tillis was joined on the song by Kris Thomas, an R&B singer O’Brien had found on the Internet. He also happened to be an SMA alumnus.

Mrs. O’Brien again hired Thomas and made a donation to SMA for its students and staff to perform on her 2014 anti-bullying song “Remember,” which was produced in Pompano Beach, Florida by Rob Roy and team, and at Memphis’ Royal Studio by Willie Mitchell’s grandson Boo Mitchell. The song also featured The Voice 2021 runner-up Wendy Moten, Isaac Hayes’ youngest son Kojo Hayes, and many others. The following year Mrs. O’Brien, Thomas, Moten, and students and instructors of the Stax Music Academy hosted an anti-bullying concert rally in Heber Springs, Arkansas.

In 2016, O’Brien established the Berger Family Foundation Scholarship Fund at the Stax Music Academy with a donation of $6,000. Her passion for assisting deserving young students with much-needed tuition funding was a testament to her love of children and her love of music.

At the time of her passing in May 2022, she had just released a memoir titled I Believe, and was planning a launch party that was to feature live music by 926, the Stax Music Academy Alumni Band.

To donate to this year’s #MusicMustContinue fundraising campaign so that no young person is ever turned away from the Stax Music Academy because of inability to pay, please click HERE.

In 2020 during the height of the COVID-19 pandemic, the Stax Music Academy closed for in-person music education and youth development programming and switched immediately to a virtual experience. We also made the decision to suspend all tuition, partly because of the new learning curve and because so many of our families were so negatively affected financially by the coronavirus.

In July 2020 we launched our first #MusicMustContinue fundraising campaign to ensure that we never turn a young person away because of the inability for their families to pay even the small amount of tuition we charge (most families pay only $200 a year). Our donors and sponsors stepped up to the plate and helped us raise over $50,000. #MusicMustContinue became an annual fundraiser that allows us to offer such deeply discounted tuition and to invite all young people interested in music to participate in some of our endeavors.