MEMPHIS, Tenn., August 2021 — When the pandemic forced the cancellation of Opera Memphis’s much anticipated “Beale Street Boheme,” which would have featured a chorus of youngsters from the Stax Music Academy, McCleave Directing Fellow Bethania Baray chose to see it as an opportunity to explore opera more deeply by developing a class at Stax, the acclaimed Memphis institution. Working with Stax lead vocal instructor Keia Johnson, Ms. Baray developed a brand new curriculum. Four talented students participated in the year-long class, which took place largely through remote learning due to COVID protocols. Ms. Bethania – as she is affectionately known by her students – instructed the class on the history of opera, exploring language and musical styles that were previously unknown to the curious novices. The year concluded with a performance of “The Evening Prayer” from Hansel and Gretel sung by the four students in both English and German. 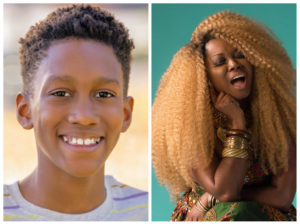 One year after enrolling in the Opera Class, talented 12-year-old Caleb Thompson will join the roster of the most prestigious opera house in the country. The Metropolitan Opera in New York City will begin its 2021-22 season with Fire Shut Up in my Bones by award-winning jazz musician and composer Terence Blanchard. This piece marks the Met’s first performance of an opera by a Black composer in it’s nearly 140-year history. Blanchard’s adaptation of Charles M. Blow’s poignant memoir features a libretto by filmmaker Kasi Lemmons and will star baritone Will Liverman as Charles (2020 Marian Anderson Vocal Award winner; 2019 Sphinx Medal of Excellence) and sopranos Angel Blue as Destiny (Grammy award winner, Bess in Porgy and Bess) and Latonia Moore as Billie (Grammy award winner, Serena in Porgy and Bess). Memphis’s own Caleb Thompson will understudy the role of Char’es Baby, the production’s only singing role for a child. After a search that included hundreds of talented, young applicants, Caleb persevered through numerous auditions and callbacks to secure his place in this historic production.

“What a privilege to help expand this relationship with Stax Music Academy and offer an opera ensemble class.” Bethania Baray says, “I knew these students would be one-of-a-kind, but students like Caleb have completely surpassed my expectations. Two semesters later, I find myself meeting with Caleb via Zoom to coach his audition for a role at the largest opera house in the world. He is incredibly hard working and talented, and I could not be more elated for him!”

The relationship with Opera Memphis and Stax stretches back to 2011, when students serenaded audience members at a performance of Tosca from the grand staircase in the lobby of The Orpheum. Since then students have performed as a part of numerous Opera Memphis events, OM guest artists have made classroom visits, and at one point a faculty position was funded in part by Opera Memphis. This class marked a new level in the relationship as the first year-long class focussed specifically on opera.

Keia Johnson, lead vocal instructor and Stax Music Academy educator, had this to say. “Caleb is the kind of student every teacher wants. He’s joyful, hardworking, FUNNY and so talented. But it’s how his family supports him that warms my heart. When Caleb wins, they all rejoice and I consider myself lucky to be a part of his village. I am so proud to teach voice to him but mainly to be someone in his life that gets to see him win, go Caleb go!”

For more information on Stax Music Academy, or to help support their mission, visit: staxmusicacademy.org

To learn more about supporting this unique collaboration, contact us:

Caleb is an extremely gifted and outgoing child. He is passionate about life and he aspires to work in television, film and theater. Caleb enjoys performing and is an accomplished singer, dancer, actor and model. Caleb is excellent at memorizing lines and he takes direction well. He may only be 12 years old but his resume is longer than many adult models and actors. He booked his first job at 5 months old and he has been working consistently ever since!

?Most recently Caleb can be seen in the upcoming ABC miniseries ‘Women of the Movement’ about Mamie and Emmett Till. He also plays a student in the Paramount feature film “Clifford” set to open in Fall 2021.

In 2019, Caleb was on Ep.6 of the NBC drama ‘Bluff City Law’ where he played Lorenzo Wright. He made his professional theatrical debut in the Asian tour of Kinky Boots in the role ‘Young Lola”! The tour kicked off in Shanghai July 2018 and finished up in Beijing in September 2018!

?Caleb has also performed in Off Broadway productions in roles like the Christmas Carol’s Tiny Tim at the famed Player’s Theater in the Village. He has performed in outstanding community theater productions in NJ, NY and TN as well, most recently as ‘Young Simba’ in Stage Door Productions “The Lion King Jr.” for this role he was nominated for ‘Best Younger Actor’! by BroadwayWorld.com.

As a commercial print model and actor he has been in many regional and national commercials and campaigns like Bank of America and Perkins Restaurants.

Caleb is a vocalist at the Stax Music Academy and the Memphis Children’s Choir.

He loves to dance and has classical and modern ballet training as well as tap, jazz, and hip hop training. For two seasons Caleb danced with the NBA Memphis Grizzlies Blue Bunch dance team, having performed at NBA, G League and AHL games. He is currently entering his 3rd year as a dancer with the Collage Dance Collective.

Academically, Caleb is an honor roll student. He has studied Mandarin since he was 2 years of age. He reads, writes, speaks and has even performed in Mandarin and Chinese Arts!

Originally hailing from from Newark NJ, Caleb is a recent transplant to Memphis Tennessee where he is a rising 7th grader with the Mid-South Gifted Academy.

CALEB IN THE PRESS

From the Tri-State Defender

From The Daily Memphian

From The Memphis Flyer