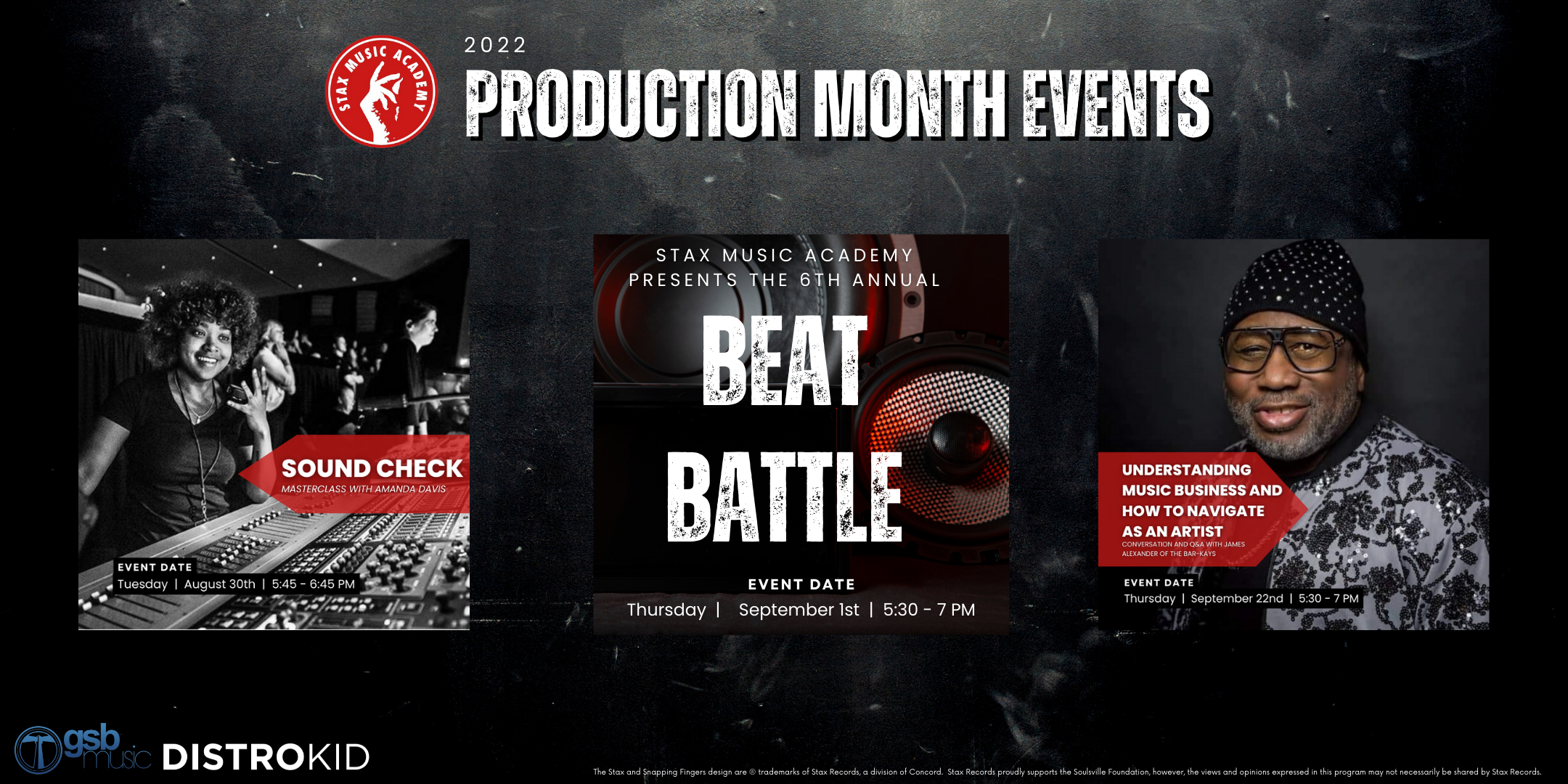 All events are free and open to 6th – 12th-grade students in the Greater Midsouth Area.

Young musicians and creatives! Looking to connect and learn with other young creatives in the same field? Check our line-up for the 2022 Production Month. Scroll down for event details. 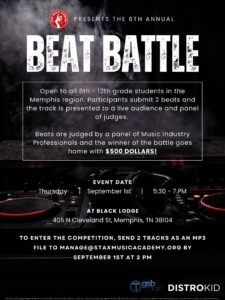 Participants submit their best beats and the tracks are presented to a live audience and panel of judges. Beats are judged by a panel of Music Industry Professionals and the winner of the battle goes home with $500 DOLLARS!

If you are a young musician, this is the perfect chance to not only win a cash prize but connect and learn with other young creatives in the same field.

WHO CAN ENTER
Open to all middle/high schoolers in Greater Memphis Area.

IS THERE A THEME?
There is no theme or boundaries on what you submit. Beats, song tracks, instrumentals – you have total creative freedom.

DEADLINE TO SUBMIT
Submissions must be sent by September 1st at 2 PM.

HOW TO SUBMIT?
To enter the competition, send 2 tracks as an mp3 or mp4 file to by September 1st at 2 PM 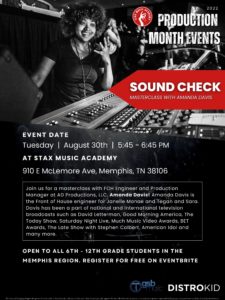 Join us Tuesday, August 30th, 5:45 – 6:45 PM at the Stax Music Academy for a masterclass with Front Of House Engineer and Production Manager at AD Productions, LLC, Amanda Davis!

Amanda Davis is the Front of House engineer for Janelle Monae and Tegan and Sara. A native of Memphis, TN, Amanda earned a B.A. in music with a focus on Vocal Performance from Roosevelt University in Chicago in 2008. In 2010, Amanda decided to refocus her career aspirations on music recording and production, so she enrolled in the Audio Technology Program at SAE Atlanta. Upon graduating, SAE was so impressed by Davis’ skills that they hired her as a lab instructor and their first female instructor, specializing in Music Theory. After two years at SAE, interning at studios, working local clubs and churches to break into live sound, Amanda went on to work as an Audio Technician for Carnival Cruise Lines. In the Fall of 2013, Amanda was recruited by Wondaland Arts Society to be Janelle Monae’s official Front of House Engineer for her national and international concert appearances.

While working with Ms. Monae, Amanda has mixed legendary artists such as Prince and Stevie Wonder. Davis has also mixed in some of the world’s most renowned venues such as Madison Square Garden, Radio City Music Hall, Hollywood Bowl and even the White House.

Understanding Music Business and How to Navigate as an Artist: Conversation and Q&A with James Alexander of The Bar-Kays 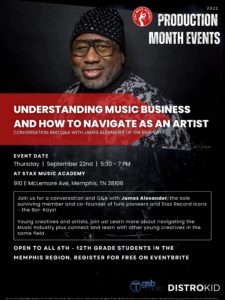 Join us Thursday, September 22nd for a conversation and Q&A with James Alexander, sole surviving member and co-founder of funk pioneers and Stax Record Icons – the Bar-Kays!

Alexander was the original bassist for the Bar-Kays when four of the six band members were killed in the same December 10, 1967 plane crash that claimed the life of singer Otis Redding. Alexander was the only Bar-Kays member not aboard that flight, which was carrying Redding, five of the Bar-Kays, the pilot, and Redding’s road manager. Because the plane could accommodate only a certain number of people, Alexander boarded a commercial flight to Milwaukee, Wisconsin, with plans to join the group for their next gig in Madison. After the plane crashed in the icy waters of Lake Monona just a few miles from the Madison airport, Alexander had the task of identifying the bodies of his bandmates, as well as that of Redding. He was 17 years old.

Formed in 1966 initially as an instrumental group, The Bar-Kays had their first smash hit in 1967 with “Soul Finger,” which peaked at number 3 on the U.S. Billboard R&B singles chart and number 17 on the Billboard Hot 100. It was after the success of the song that Redding chose The Bar-Kays as his touring band.